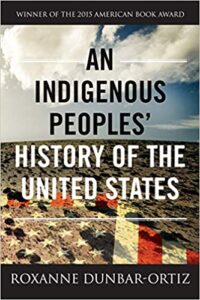 I have joined another book club, “Decolonize this Book Club” sponsored by Embrace Bend.  It has a very specific objective.  We gather to read and discuss voices and stories of BIPOC (Black and Indigenous People of Color), 2SLGBTQIA+ folks, disabled folks, Jews and Muslims, Palestinians, migrants and refugees. Here is a link:  https://www.embracebend.com/decolonize-this-book-club

The “young people” version of An Indigenous Peoples’ History of the United States for Young People is not as dense as the adult version, for sure.  I had both in my possession for a while, so I compared a couple of chapters.  However, the essence is well represented in the version for the youth.  Plus, they added photographs, maps, etc.  and best of all, activities such as: discovering how many indigenous words there are for “corn” (62), and common words that came from indigenous languages (I will let you find those on your own.)  And seeing how many of the 573 sovereign nations in the U.S. you can name in three minutes (I was really bad at that).

I didn’t have this context in my brain: White supremacy as a concept has existed at least since the Crusades.

I didn’t know this:  Colonists scalped and collected bounties for scalps. I thought it was only the Indigenous people who scalped.  Boy, was that incomplete information.

I think the title of this book is a bit misleading.  A more accurate title in my opinion would be A History of the United States’ Treatment of Indigenous Peoples.  The “eye,” the “view,” in this book is from the perspective of the colonists and the United States, i.e, what actions they took that are not reported in our typical American History classes.  What it doesn’t show us (and this may not be possible) is the view of a Cree, a Cherokee, a Ute, a Sioux, a Klamath, etc.  What was it like to be peacefully raising your children, growing corn, eating bison, participating in spiritual ceremonies, and have your village invaded and burned down, your land taken, your children killed?

This is another book every American should read.  I became sick and tired of studying account after account of colonists burning, killing, driving off, ignoring treaties, dehumanizing, slaughtering animals ...  No wonder Trump signed an executive order to establish the “1776 Commission” and whitewash our history.  Between this book and Caste, we learn some (much?  most?) of our history is simply abhorrent.