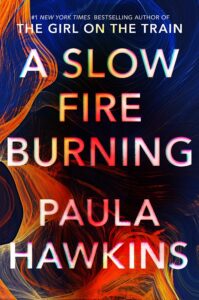 After a young man is found murdered in a houseboat in London, five women and one man, who have unique and complicated connections to him and to each other, and all of whom are juggling their own secrets, become embroiled in the search for the murderer.  (And we know one of these characters will emerge as the guilty party!)

I was disappointed.  I expected more from Paula Hawkins after A Girl on the Train.  All of the significant female characters in this book are dysfunctional and some are psychopathic.  I didn't like even one of them.  I thought Hawkins did such a poor job of character development that I had to make a cheat sheet to differentiate characters, one from the other. Which was the one-night stand?  Who stole which key?  Who was related to whom?  Goodreads reviewers have rated this book lower than any other book in my blog (I think), at 3.4 out of 5.0.

So, why three hearts?  It is a compelling and interesting murder.  Who-done-it readers may well enjoy the plot development, especially if you are better at keeping the characters straight than I am.  The plot is its strength. The title works well, too.

So, try this on for size if you feel drawn to it, and let us know what you think!