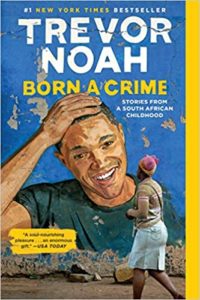 I LOVE this book!  If you want to read about a difficult subject, be sure you read it as written by a comedian.  Born a Crime is Trever Noah’s memoir about growing up in South Africa during, and shortly after the end of, apartheid.  With a black mother and a white father, Trevor was born mixed-race. It was illegal to be mixed-race, hence he was “born a crime.”

I read this book the Fourth of July weekend.  It is absorbing.  Noah tells such a good story, and you will learn much about the numerous and varied racial groups in South Africa, and the completely illicit distribution of power.  It sounds depressing, doesn’t it?  But not the way Noah writes it, through the eyes and actions of a child, teenager, and young adult.  Noah is now the host of The Daily Show on Comedy Central, lives in New York City, and his book is truly educational and remarkable.  I highly recommend it.

Two interesting facts.  There is an adult version and a young adult version.  Apparently there is little difference, except swear words like “shit“ are replaced with more socially  acceptable words like “poop.”  And my friends tell me the audio book, with Trevor Noah reading, is excellent.

One response on “Born a Crime”