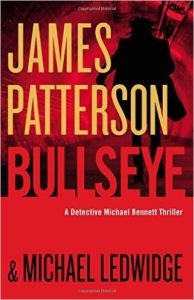 I have to give it two hearts because I must assign it, "don't bother to read."  This is not a Patterson I recommend.  I wonder if it is the influence of the second author, Michael Ledwidge?  Bullseye (which is stupidly named and would be way more clever, though not as broadly appealing, if it was named Matryoshkas from a conversation in Chapter 76 about the situation facing the main characters being like nested Russian Dolls.)

There are too many characters and their development is too shallow. This is the ninth book featuring Detective Michael Bennett, but the first one I have read, and the authors forgot to give us the two sentence explanation of who Michael is.  He seems to be a single dad with ten children in Catholic school, a girlfriend/nanny named Mary Catherine (can't get much more Catholic than that!) and a priest named Seamus who hangs around the house for some reason.  But we don't get any explanation about why Detective Bennett is in these particular life circumstances.  Is he divorced?  Widowed?  Promiscuous?  Did he somehow acquire an orphanage?  There is one clue almost 300 pages in.

This book was written in 2016, and Vladimir Putin is suspected of being behind the attempt on the life of the President of the United States (Bullseye's plot).  Too close for comfort?  There are not one, but two married couples in this book who are co-assassins.  Is this a new language of love?  One of the couples is quite endearing!

If you want something mindless to entertain you on an airplane, you might choose this.  But otherwise, don't waste your precious time sitting by the fire with this book in hand during this, one of the worst winters in years on the North American continent.