479 pages (includes 88 pages of notes, acknowledgements, a bibliography, and an index) 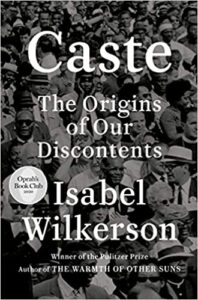 In a single word, powerful.  I am floored by this book.  Wilkerson presents a history of caste.  Not race, but caste ... a ”stubbornly fixed ranking of human value.” (pg 24). There are only three examples of caste systems in the modern world.  India, Nazi Germany, and the United States.  She compares and contrasts these systems, spending most of her time on the US institution of slavery as a prime component of caste in this country.

Of the many, many things I learned, here are three.

This is a hard book to read.  While Wilkerson uses a lot of metaphor, especially early in Caste, to engage the reader, it still is not a story in the way The Warmth of Other Suns was.  It is pure non-fiction. And the facts are extremely hard to take.

No question, I highly recommend this book to all of you.  It could be required reading for every single student or teacher of American History.  It is what “Patriotic education” should really be about … telling the truth.  It teaches an important story we never, ever learned in fifth grade.