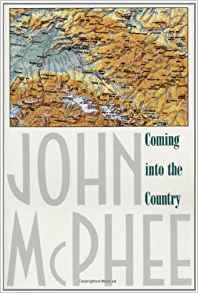 I was delighted by this book from the very first page.  McPhee’s writing is like having a conversation over coffee. It is easy, engaging, curious, unhurried.

Before I opened this book, I thought I had made a mistake.  Other travelers give you books to read before you travel somewhere.  I received an extensive list from Off the Beaten Path for my tip to Alaska (which I didn’t even find until the day before I left.)  Anyway, I digress.  I began this book after I returned from Alaska, and I loved that I had seen a number of the places McPhee writes about.  I wasn't totally dependent on my flawed imagination.  I could truly picture what he saw.  Of course, McPhee shares a common Alaskan comment, “I’ve flown it but not walked it.”  That is very true for me and my “seeing” of the spaces and places.

This book is actually three separate stories, woven together by McPhee and his experiences in Alaska.  In the first, “The Encircled River,” he travels down a Brooks Range river with a cadre of men from various government agencies – the Federal Bureau of Outdoor Recreation and the Alaskan Department of Fish and Game, for example.  I loved this true wilderness story.  It spoke to the only fantasy I left Alaska with; to maybe, someday, float a river in the spectacular Brooks Range.

The second book is about urban Alaska – a minuscule but important part of the state.  In “What They Were Hunting For,” we go on an air-and-land search for new state capital, after a 1972 initiative passes the voters.  The difficult-to-access town of Juneau was (and is) the state capital.  In the initiative, the capital could not be Anchorage nor Fairbanks, or within 30 miles of either city.  Eventually the Capital Selection Committee selects Willow as the new capital, and we see the lands they explored on their way to that decision.  (Funds never were allocated for completion of this capital and it remains Juneau.)

Finally, the last book, “Coming into the Country” is more than half of the total read, in which McPhee tells story after story about the people who choose to live a subsistence life in the very remote back-country Alaska interior.  These are fascinating, sometimes sad, and often inspiring stories.  (Reminded me of the style of a favorite author, Studs Terkel).  McPhee also portrays and explains the considerable challenges encountered over time among and between the values of the Alaskan white people, Indians, Eskimos, and the Federal government. I find myself using these stories today to speak to topics of risk, adventure, values, principles, self-sufficiency, life and death.

Coming into the Country deserves four hearts.  It is a strong read.  I have not read other John McPhee, but I understand all of his books are a force to be reckoned with and good way to while away winter hours.  A part of me wanted to give this book three hearts, but I realized this was my failure, not the failure of the author.  Coming into the Country was published in 1976/77.  McPhee incorporates many interesting statistics, such as the price of milk, the number of people living in Eagle, the journey and cost to bring a large CAT machine into the back-country, and the percentage distribution of lands that are federal, state and private. These statistics are all very dated – they are more than 40 years old – and I found myself constantly wondering “What is it today?”  Unfortunately – no, fortunately – I read Coming into the Country while camping at Little Crater campground and had no internet service to distract me with the answers to these questions!

Enjoy this book!  And please let us know what other John McPhee’s you have read.  What did you like or dislike?

2 responses on “Coming into the Country”