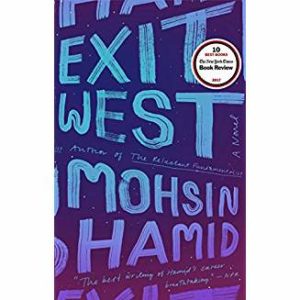 I cannot categorize this book. Is it a love story?  Sort of, but not really.  Is it a dystopian novel?  At times, but not overall.  Is it magic?  Well, yes, magic does play a part.

We don't know the setting of Exit West.  It may be a city in the author's home country of Pakistan, but it could just as easily be in Syria or Libya or other countries.  What we know for certain as the novel opens is that it is “a city swollen by refugees, but still mostly at peace, or at least, not yet openly at war.”  It is a city where “Islam prevails, but sex, ‘shrooms and smartphones are also prolific.”  (Time.com)

In the beginning, Saeed and Nadia meet in a class and fall in love in these turbulent times. And then the war invades their city, their lives, and their love.  How might they escape through one of the magical doors to safety?  Yes, there are magical doors. At first I thought the “door” was simply a metaphor, but it is not.  You find and pay an agent, a mule of sorts, and he leads you to a hidden magical door.  You walk though this door, and you are in another part of the world.  Saeed and Nadia inhabit a number of cities in the world in this concise novel, as they try to make their way to a place of home and of safety.

The dystopian part of this novel is this:  in every city they travel to, war has broken out between the natives, called “nativists” and the immigrants/refugees.  And in every city, immigrants are beginning to take over, though nativists are violently resisting them.  I think this novel is very timely and for this reason alone, we all should read it.

Exit West is short, well-written and a novel that will make you think.  I recommend it without hesitation.  And I look forward to reading what you think of it …