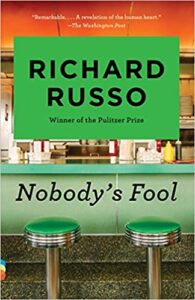 Perversely, I finished it.  It was in large part because I was confined to the house with the Air Quality Index in the 500’s.  Thanks to the breath-stealing wildfire smoke, I finished it.  However, I didn’t enjoy it at all.

The novel's main character is Donald “Sully” Sullivan, who is stuck in bad luck, as an unemployed construction worker with an arthritic knee that has him on disability, with a truck that is dying, a long-time mistress he doesn’t know what to do about, friends and a lawyer who are not very bright, and an estranged son, Peter, whose marriage is falling apart.  And three odd grandsons. He does have an interesting relationship with his spry octogenarian landlady and eighth-grade teacher, Beryl Peoples (okay, I admit to a little bias in her favor due to her cool name).

Nobody’s Fool is mostly men expressing their caring for one another through negative humor.  Sully, as the protagonist, does manage to pull himself out of this way of communicating occasionally, especially with the women in his life and his grandson, and you cheer him on every time he does so.  Truthfully, I fell in love with Sully eventually.  He kept trying to be human.  In the end, however, there is no conclusion or obvious growth or resolution.

Sometimes I read reviews of books when I am partway in, if I am having difficulty either understanding the book or appreciating it.  I did that with Nobody’s Fool and learned that Publisher’s Weekly loved it; felt it was “biting wit and potent insight” about blue-collar people in a small New York town.  Kirkus was not so positive: “Russo's third <novel> is a slice of small-town life: thick slice, big cast, much bustle, but no story line, no climax, no epiphanies.”

I felt this compulsion to read this book, and I don’t know why.  I struggled throughout its 549 endless pages.  I know it is supposed to be funny (here I go again) but I did not find it funny to hear/read the interactions between not-very-smart men who often don’t understand a plethora of words or phrases, and who don’t get jokes, and who don’t know how to communicate, and who are decidedly not self-aware, and who are taken advantage of, and who devise their own wiles for surviving in a difficult world.  I just didn’t find these interactions laughable.  I found them tragic and difficult.  Somehow, I was engaged enough to keep reading, all the way to the very end, but I cannot recommend this book.