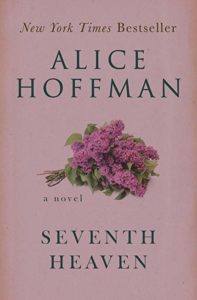 What is this book about?  The reviews and the back cover imply that it is about Nora, a newly-divorced woman who moves into a rundown house with her two sons.  She is a major character, but it really isn’t all about her and the influence she has on her neighborhood.  Really, it is about the teenagers and children and moms and dads who inhabit Nora’s neighborhood.

It is New York, Long Island, 1959.  The houses in Nora’s neighborhood are identical.  So identical, in fact, that it takes people almost a year to stop pulling into the wrong driveway or walking up the wrong front walk.  But, of course, the people inside are not identical, even if at first blush they all seem to be cut with the same cookie cutter .... one for the husbands, one for the wives, another for the children.

Hoffman’s writing is smooth and engaging.  She draws you right into her story, and into the lives of these ordinary people.  I like the LA Times Book Review quote on the back cover.  “...it gives one new respect for tender suburban dreams.”  An apt description, I think.

Not being clear what the book is about, or really finding its meaning or purpose, is what knocked it down to three hearts for me.  It is, however, a quick read, and you might find deeper meaning than I did.

Finally, I haven’t a clue why this book is titled Seventh Heaven.  I don't remember the phrase every coming up, and I think it is a diminutive title for the book.  I would have titled it Identical.