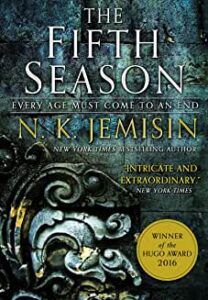 This was my second “alternative universe” read in the last few weeks, and I am quite glad I chose this one.  I wasn’t looking for a science fiction or fantasy book when I happened upon The Fifth Season, I was looking for a fiction novel written by a Black woman, as part of my ongoing learning this season.  And I found a distinct one, for certain.  This is the first book in The Broken Earth trilogy. Jemisin earned a Hugo award for all three books in her series.  She is the first writer ever to win a Hugo three years in a row.

On the continent, The Stillness, there are five seasons:  spring, summer, fall, winter, and death.  The people of The Stillness are always preparing for the fifth season which can last from months to more than a century.  The main characters, sort of, are Syenite, Essun, and Damaya; strong and powerful women.

One of the elements of science fiction writing I don’t like is the endless war between factions.  This was a relief from that tendency.  There isn’t a battle, per se, in The Fifth Season, until right at the end.  The people in this fantasy world, living on a fantasy continent, have powers.  There are seven powers in all.  The powers become like races, in that they distinguish and have their hierarchy of supremacy, one over the other.  I began to get a sense how N.K. Jemisin’s race informed the essence of this tale.  She speaks herself to this, here: http://nkjemisin.com/2015/08/creating-races/

Here is what one reviewer had to say, which I found after I finished the novel (Celline, NYX Book Reviews).  ”A common thread throughout the novel is a commentary on race and Othering. To give a quick summary, theories around Othering try to explain how groups of people can be made to seem inhuman, not one of us, the Other. Throughout history, racial difference has often been used to treat groups of people horribly, a rhetoric employed to justify acts up to and including genocides. In The Fifth Season the racial Other is displaced unto the magical/powerful Other. It is not skin colour that sets people in this world apart (what we now would see as blackness or a mid-African phenotype is a point of beauty) but what they can do. While the characters face terrible injustices because of their capabilities, the reader feels that their powers are actually amazing and should be cherished.”

Part way through I wasn’t sure what she was talking about, and so I Googled some words: rogga, orogene, sessapinae.  Imagine my delight to find that an author can make up her own words in her own book and with enough fame, Google and Wikipedia will define these words.  How cool!  Of course, when I arrived at the end of the book, I discovered there was a glossary of all her invented words.  Oh.

I recommend this.  It is a very odd read for me, and it will be for some of you also.  The genre is officially “Science Fantasy.”  I found the writing interesting, the tempo fast and engaging, the “not-knowing what is going on” a relief for my brain. I intend to read book two in the trilogy.

One response on “The Fifth Season”