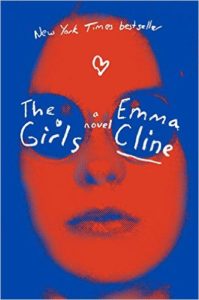 The Girls tells an intriguing story of a cult, a commune of sorts, in Northern California in the late 1960’s.  Evie Boyd is a bored and drifting 14-year-old, who is captivated by the group after she encounters “the girls” in a park near her home:  “I noticed their hair first, long and uncombed. Then their jewelry catching the sun. The three of them were far enough away that I saw only the periphery of their features, but it didn’t matter — I knew they were different from everyone else in the park.”  Evie is mesmerized and is soon drawn in by Suzanne and the charismatic leader of the group. Russell.

It is a story of the vulnerability and naiveté of teenagers, especially at this time in our country where drugs, freedom, and frayed long granny skirts were rampant.

Unfortunately for the story, it is clear this is Ms. Cline’s first novel. Her story is compelling; her writing is not.  For some unknown reason, she tells the story from the viewpoint of Evie as a grown woman, decades later.  This trick of the writing trade adds not an ounce of interest.  Fortunately, she only returns to modern-day Evie three or four times, but each time is a jarring waste of effort.  Second, the author does not yet have the skill to build suspense. You know there will be murders.  This is mentioned early in the book, and then again around page 200 for a few pages, and then she abandons it again until page 312.  There is way too much time in-between these hints of what is to come to create a sense of anticipation in her writing.  I imagine a friend of hers reading the draft and saying, "You need to plant a seed of the murders earlier in the book," and Ms. Cline randomly obliges her friend.

Finally, and most difficult of all, the book is overwritten.  An example on page 200: “I got up once to get Suzanne a glass of water, and there was a domestic gentleness in the act.  I wanted to meet a need, put water in her mouth. Suzanne smiled up at me as she drank, gulping so fast I could see her throat ripple.”  The last sentence – even the last two sentences – added not an iota to the story.  The author has many filler sentences like this.  I can just imagine Ms. Cline writing out her story in a rush of ideas and creativity, and then painstakingly working her way through her tale, word by word, inserting words like “rupture” for “path” and substituting “yoke” for “yank.”

I hope in her next novel she writes from her imagination, and leaves it at that, without trying hard to add “interesting” words.  Her prose, then, will mature and perhaps captivate us, as the ranch captivated Evie.