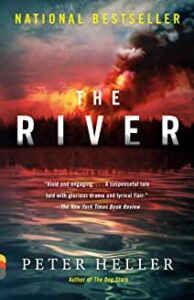 This is the perfect book to read when you are housebound in hazardous smoke due to exploding wildfires.  Wynn and Jack, friends since freshman orientation at Dartmouth, are spending a couple of weeks in August canoeing the Maskwa River in Canada, which eventually empties itself into Hudson Bay.  Of course, it wouldn’t be a great story if all they were doing was fishing for brookies and picking blueberries.  Instead, they rescue a woman who has a concussion, a dislocated shoulder, is bloodied and bruised, and is in shock.  Is her husband the cause of these injuries?  As they begin to paddle her downstream, they are about ten days away from a Peawanuck village and safety.  Meanwhile, a crackling, smoky wildfire off the western bank grows closer and closer.

How they complement each other!  Jack has a hunter’s instinct and can see movement on land far away;  Wynn can read the water like a pro.  As fly-fishers, Jack casts easily with grace; Wynn studies and calculates before he casts, cutting the water into quadrants.   Wynn studies the arts at Dartmouth; Jack, engineering and math.  But they both have an insatiable love of books, poetry, fiction, and of course, expeditions.

The writing is superb, visceral, urgent, terse.  I couldn’t read it fast enough.  Especially for those of you who are engulfed in smoke right now, Chapter 16 is amazing.  It is when they are really IN the wildfire, and Heller writes about the brutal sounds of a wildfire.  Spellbinding.  I chose a quote that illustrates both his writing style and the intense love these two best friends have for each other, as Heller writes about paddling together.  “Wynn notices that after a while he barely had to utter ‘hut’ before Jack switched and the paddles swung up and forward in perfect synchrony and their four hands changed position on shaft and handle midair and the blades hit the water at exactly the same moment ...”  (chapter 11)

3 responses on “The River”