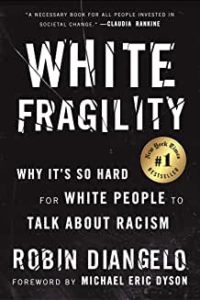 I think I am behind my friends and colleagues in reading this book.  It was on my list before the pandemic and before George Floyd, but I just read it now (in one Sunday afternoon).  Yes, I believe we all should read White Fragility.  You might not experience huge revelations, but it will definitely heighten your awareness about the white contexts in which we blindly live.  Because I know my perspective is biased as a white, I looked for reviews written by people of color.  One black reviewer said this book gave her hope.  Another said he thought this book should be required reading for all BIPOCs because it explains so much about the dominant context.

DiAngelo explains what she sees as systemic racism and makes a case for it being systemic white supremacist racism.  She sees white supremacy not as a fringe value, but something that is inherent in the system.

I really liked Chapter 10, which demonstrates fragility.  How, if you must give me feedback about something I have said or done that might be construed as racist or race-ignorant, you should do so with kindness, and the right tone, at the right time, only after we have built trust, privately, ensuring I am safe, having acknowledged my good intentions .... otherwise I might cry (sucking all the energy and emotion to me instead of you, who felt the impact of what I said). Or walk away.  Or get angry.  Or sulk.  Or disengage.  Chapters 9-12, more specifically about fragility rather than systemic racism, are quite powerful and informative.

While I think her psychological, sociological, and interpersonal views are well-substantiated, some of the more factual components of our history are not her strong points.  For example, DiAngelo says Affirmative Action never applied to private companies, only government agencies.  Untrue.  Private employers who do more than $50,000 business with the government, or who have more than 50 employees were required to develop Affirmative Action Plans.  Where is her editor at Beacon Press, and who is fact-checking?

So, in conclusion, yes I recommend this book for anyone who is curious about themselves and their role in systemic racism.  And it is neither a long nor a heavy. read.