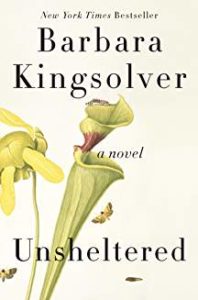 I shelved this book in my suitcase, flying home from Baltimore.  I became bored and frustrated.  And then I decided to wait to write my blog posting until after book club.  Hearing my friends’ view of Unsheltered, I picked it up again and finished the last 150 pages.  It still is not my favorite book, for certain, and Kingsolver’s writing leaves me rather chilly.

Unsheltered follows two families living in the same house at two separate time periods in Vineland, New Jersey. The novel alternates between the 21st- and 19th-century stories, using the last words of one chapter as the title of the next one.  In both situations, the house is falling apart.  Willa and Iano are our modern-day couple, with extended family members living with them, holding a range of political and social allegiances.  Thatcher and Rose are the 19th century couple, also with several extended family members living with them.  This novel was written recently enough that we meet “The Bullhorn” who quips that “he could stand in the middle of Fifth Avenue and shoot somebody, and people would still vote for him.”

My book club members discussed the many metaphors, as well as the intentional analogies between the two families attempting to live in a falling-down house, 140 years apart.  There are many, as Kingsolver gives us lectures on Darwinism, the beginning thoughts of evolution, climate change, recycling, the workings and failings of the financial systems, the roles of the educational system and religion, politics, racism, parenting, love, grief, inequality, and women wearing trousers (!) to name a few!

I can’t put my hand on what I don’t care for in Kingsolver’s novel. The parallel stories are interesting (most reviewers and Casting Crew Book Club members preferred Thatcher and Rose’s time period, the 19th century. ) Her characters are a bit cliché, especially given their strong political allegiances, but I don’t find them too shallow for the work she was writing ... the quantity and diversity of views were interesting in and of themselves. I didn’t need to know the intellectual or emotional source of their viewpoints. One reviewer describes Kingsolver as a “political novelist” who “has only the shallowest understanding of political reality.”  I understand that review, but I wasn’t reading her for her political commentary.  Sometimes, the “cliché-ness” was fun!

I guess I just found Unsheltered tedious.  I became bored.  Maybe it was just the travails of airport and airplane air.  Finishing Unsheltered allowed me to upgrade my rating from one heart to two hearts reaching up tentatively towards three.  It is worth a perusal to see if you like it; I think many of my readers would.  My book club did.