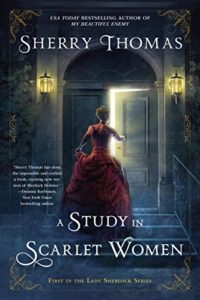 I’m confused. This book, which I finished primarily so I could write a blog post, simply confused me. I was half-way through before I figured out what was going on.  Was I dense?  Or did the plot really not reveal itself until half-way in?  Charlotte Holmes assumes the name of Sherlock Holmes and searches for the culprits in three murders.  It IS on the back of the book – I guess I should have known earlier that Charlotte was operating a ruse, under the name of Sherlock Holmes, but I didn't seem to connect to this information until nearly halfway in.  And then, with three murders and multiple suspects, I continued to be confused. And when it ended and all was revealed?  Well, suffice it to say, I was still confused.

So, you may ask, why not one heart?  Because I finished it.  I loved Charlotte's character — she is a renegade; she fights the morals of her time; she meets some delightful people along her journey.  Especially Mrs. Watson (I assume that her name was appropriately tongue-in-cheek!)  However, I don’t think I will pick up another Sherry Thomas soon.  I have way too many books on my “must be read” list.

2 responses on “A Study in Scarlet Women”