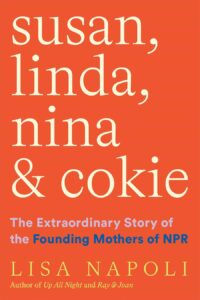 It was August 1971 when I drove away from my parent’s home in suburban Detroit, maneuvering my Chevy Vega, which was packed to the hilt with clothes, records, books, pens, notebooks, and probably chocolate chip cookies, for the hour drive to Ann Arbor.  Ann Arbor and the University of Michigan was my ticket into my real life. That same evening, I participated in a candlelight protest against the war in Vietnam.  On the drive to A2, I discovered NPR for the very first time.  50 years later, almost to the day, NPR remains my primary source of news.  I was so excited when susan, linda, nina, & cokie was published; a tribute to the founding mothers of NPR.

This book takes place almost exclusively in the 70s and before, as we learn about how these women broke into the broadcasting industry, the fascinating stories of their education, their lineage, and how they came together as colleagues.  Inextricably woven with the creation, challenges, and growth of NPR, Napoli’s book also catalogs the development of public broadcasting in general and NPR specifically.

Delightful footnotes will lead you to audio and video clips from the signing of the Civil Rights Act in 1964; to the first All Things Considered theme song; to the first on-air original NPR broadcast, May 3, 1971, on the March on Washington Vietnam War protest; and ultimately to Cokie’s funeral mass.

I love this book and will be recommending it to my book club.