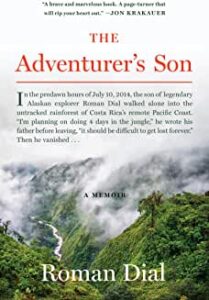 This book is a sleeper, in my opinion; at least for those of who revel in true outdoor adventures.  It was recommended by my library in their “Armchair Travel” newsletter. And it deserves greater visibility.

Cody Roman Dial disappears in the back-country of Corcovado National Park in Costa Rica, known as “the most biologically intense place on earth.”  This park is so wild, it is illegal to enter it without a guide. Yes, our heroes break the law.  This is the story, written by his father, of a father’s search for his son, filled with adventure and mystery, after Cody misses his “out date,” July 15, 2014.

But first, for almost half of the book, we watch Roman Dial and his wife Peggy raise Cody and his younger sister Jazz.  Ice climbing, pack rafting, obsessed with animals and flora, adventure finders, mountain climbing, camping, skiing, hiking long distances are just some of what the Dial family explores together.  There is such a huge, shared love for the natural world, it will take your breath away.

This is a slow read, to be savored.  I became lost in the physical descriptions of places the Dials traveled that bear no resemblance to the United States geography I know well. Borneo, the northwest corner of Australia, Gunung Palung, Guatemala, Mexico, Tasmania, Bhutan, and many locales such as the Brooks Range, Usibelli, and Umnak Island in their home state of Alaska.  I was enthralled with the descriptions of animals and plants I could not even picture, they were so different from what we encounter locally.

Dial is not an author ... he tells a realistic and beautiful story.  This isn’t the best writing I have read, and perhaps his penchant for descriptions may derail a reader or two.  As a non-scientist, however, I found none of his writing above my head or off-putting.  Simply, it was fascinating.

Do I rate this three hearts or four?  I would only go with three because I know not all my blog readers are as enamored of wilderness adventures as I am.  However, that would do The Adventurer’s Son a disservice.  I will stay with a solid four hearts and recommend this book with enthusiasm.

2 responses on “The Adventurer’s Son”