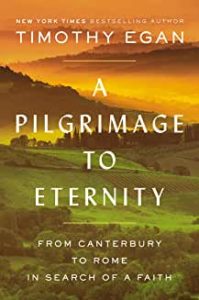 I am an atheist with an unhealthy aversion to history.  So, how is it I could like Timothy Egan’s A Pilgrimage to Eternity at a three-hearts level?  Because it is superbly written!  And if you like history, you’ll give it four hearts.  If you have a particular passion for the history of Catholicism, well, you will be in seventh heaven (yes, pun intended).  I gave the other Timothy Egan I attempted, The Big Burn, a single heart, so this is real progress.

Timothy Egan takes off on the 1200 mile Via Francigena, from Canterbury to Rome, in search of his own spiritual beliefs.  This is a trail of sorts, like the Camino de Santiago, only much less well-known. Egan walks most of the route, stays often at monasteries, and sees an inordinate number of statues, churches, Cathedrals, relics (yes, those are bones of saints), plaques, stones, arches, bridges, cadavers, and assorted other items that tell various tales of Catholicism and Christianity.  You will read about battles and beheadings, popes and princes, intellect and instability.

And what kept me enthralled is how he mixes his experience of this ancient pathway with his current life.  He connects his learning with our modern-day struggles and tells tales from his youth.  Even more intriguing to me, he talks about the food he encounters along the Via Francigena, and the difficulties and joys his body experiences in (mostly) walking 1200 miles.  So, it is a sort of long-hike travel journal, and we witness blisters and turning back when the weather becomes extreme and the joy of a stunning view. We read about pastries and cappuccinos and, of course, wines, as he travels England, France, Switzerland, and Italy. To give you a flavor, on page 138 he describes the items on a menu on Langres, France, which includes “frogs ... not frog legs, but the whole slain amphibian … and duck terrine with ‘trumpets of death’ “  All this and, too, we bear witness to Egan's search for his spiritual and religious beliefs.  What does he believe?  And why?

An essential message appears on page 64 and again at the end.  It comes from Labre, the patron saint of wandering souls, “There is no way.  The way is made by walking.”

Thank you to Ralph from water aerobics class for this interesting recommendation.

One response on “A Pilgrimage to Eternity”