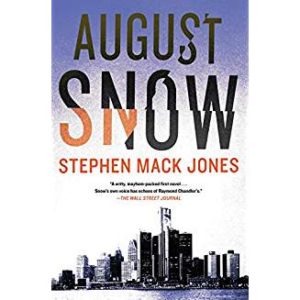 August Snow was a delightful surprise in its early pages.  It is a novel about a Detroit cop who loses his job because he whistle-blows corruption, then receives a 12-million dollar settlement, travels the world for a year, returns to his former home in Mexicantown In Detroit, and proceeds to privately investigate a murder.

The delight was in Jones’ treatment of Detroit ... the interesting and often beautiful architecture, the varied and diverse food, the many generous residents, the disenfranchised poor and Black, the desperate and determined community struggle for revival.  It was fascinating to read for a native-Detroiter, and I think it would be intriguing for non-Michiganders as well.

While August Snow (the man) has some utterly delightful relationships (yes, Snow's persona reminded me of Robert Parker's Spenser), unfortunately I found the physicality too violent and gruesome for my tastes, so the last bits, where August is confronting, fighting, and killing the bad guys, turned this novel from 4 hearts to 3 for me.

Now, here is an important question for all of you who were NOT born and raised in Detroit.  Did you, in your growing up, go out for Maurice Salads, or is this a Detroit phenomenon?  Snow waxes eloquently about this dish and I was salivating, remembering those day-long trips to JL Hudson department store in downtown Detroit, typically with my mom, where the high point of the day was the lunch break for Maurice Salad.