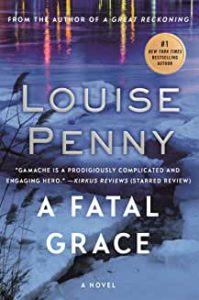 No one in Three Pines liked CC DePoitiers.  But someone hated her enough to electrocute her in the middle of the Boxing Day curling match out on the lake.  Armand Gamache is called upon to solve his second murder in the enchanting Canadian town of Three Pines.  CC is an arrogant self-appointed guru who believes enlightenment comes from burying all emotions.  No wonder she left enemies everywhere she went.

Once again, I found Penny’s writing fun and delightful.  I read the entire novel as I was traveling from Bellingham Washington to home, a 14-hour trip, on Amtrak and a bus.  Her writing is light.  Maybe too light, given the plethora of books waiting to be read.  This is the second novel in the series. I think I will read one more.

Unfortunately, I thought it was clear from the beginning who the murderer was, even though the reveal doesn’t come until the last couple of pages.  Penny’s hints were too obvious to me.  Of course, that doesn’t hurt the charm of the characters in Three Pines or the wittiness of the victim and why she was murdered.  But the suspense was dampened.