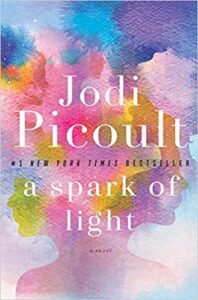 Another Picoult masterpiece.  She certainly doesn’t shy away from difficult subjects.  A Spark of Light is about a single day at a women's health clinic that performs abortions.

We have wonderful characters in this book, such as Wren, who is at the clinic only to get contraception; her Aunt Bex who brings her; Joy, the woman who has an abortion this fateful day; Dr. Louie Ward, who performs abortions at the only remaining clinic in Mississippi where a woman can get an abortion; Janine, an anti-choice activist who is in the clinic under cover, trying to catch them on tape doing something wrong.  A few other essential characters grace the pages of this story.  Of course, there is George Goddard, the gunman who holds them all hostage, and Hugh, the police negotiator who is also Wren’s father.

The story of this fateful day, Hugh’s 40th birthday, is told backwards, hour by hour.  We see what happens at 5:00 pm, then 4:00 pm, then 3:00 pm.  It is an interesting design, I think.  Instead of being focused on how the story turns out, we focus on how it is these individuals came to be where they are on this day.  Effective, I think.

There was a time when I said “huh!” aloud, in the 1:00 pm section, when Dr. Ward muses,  “This woman lying feet away from him would probably be surprised to know that she was not the first pro-lifer to walk into the Center. He had personally performed abortions on at least a dozen.”

There is a formula to a Picoult book.  She takes a controversial ethical issue ... designer babies, high-school shootings, the death penalty, white supremacy, and, in this case, abortion, and she writes a novel with real people exploring both or all sides of the issue.  I always feel just a little embarrassed when I am reading a Picoult novel ... interesting books; they make me think; but they aren’t exactly literature.  Whatever the heck I mean by that.  They seem to be written for the NYT Bestseller list ...  Recall my posting (Nabakov’s Favorite Word is Mauve) about the NYT having “dumbed down” their target reading level to grade six from grade eight.

However, her books engage, educate, inform, and cause me to reconsider how much I think I “know” on a particular topic.  I undeniably recommend A Spark of Light.  Especially if you think you know a lot about pro-choice and pro-birth perspectives.