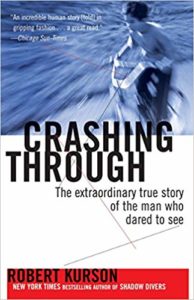 What, another Robert Kurson?  Yes!  Crashing Through was written between Shadow Divers and Rocketmen.  Though not as popular as either of these bestsellers, I just may have liked Crashing Through best of all!  It doesn’t struggle with a massive amount of technical data, like Rocketmen does, nor is it a mystery awaiting revelation, like Shadow Divers.  It is simply a story about one man.  A story that wants to be told and to be read.

At three years old, Mike May is blinded by an explosion.  43 years later he discovers that he may be a candidate to have his vision restored.  He has developed an amazingly full and rich life as an adventurous, courageous, and very curious blind person.  What will happen to his life if he can suddenly see again?  It is a momentous decision.  The first third of the book is about him making the decision to pursue the surgery that would change his life.  I really appreciated the care Kurson takes in presenting May’s thoughts and decision-making processes.

May does decide to go through with a highly risky procedure.  Then we get to witness what happens when he sees his world for the first time in 43 years, but with underdeveloped, inadequate, and insufficient vision.  I found it fascinating to be inside his brain, which Kurson communicates so very well.

Just one little oddity that bugged me.  Kurson refers to Mike by his last name, May.  Many, many times he talks about Mike May and his wife Jennifer, and he always refers to them as “Jennifer and May” or “May and Jennifer.”  I found this quirk jarring; I don’t know why he didn’t call him “Mike”.  Writer's prerogative, I guess!

This was a faster read than the other two Kurson books I have read, and well worth your time.  It is an insight into the human spirit.

One response on “Crashing Through”