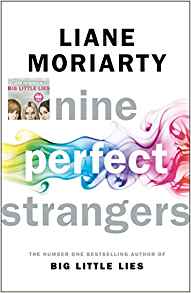 From the sublime to the absurd.

Moriarty introduces us to nine people who sign up for ten days at a remote health spa.  I had visions of Agatha Christie.  Unfortunately, her character development is nil.  The nine characters, along with three staff, are transparent stereotypes of potentially real people.  There is no depth to these characters … I never developed much of an interest in most of them.  Had she been able to create complex, real characters, I think the book would have had promise.  But she didn’t.

And then the plot takes a bizarre turn.  This was the one time where the book was  interesting.  It was so absurd, I wanted to know what each of the nine thin characters experienced.  That lasted a few chapters.  I think she needed this absurd twist because her characters were so shallow.  I mean, nine of them – 12, really – and she couldn’t find enough to say about them and their interactions without a bizarre twist?  It seemed to me to be something a highschooler would do in writing class.

I read the whole thing.  I was entertained by it in a bizarre sort of way. It was just so, um, light.  But I cannot think of a single person I would recommend this book to, so I had to go with two hearts.  I hope my next choice of books to read is better!