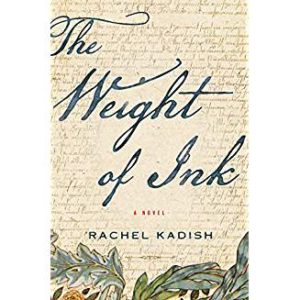 I liked this book a lot.  I didn't love it.  I loved it at first; a richly woven story told in beautiful language.  I described it to my friend Jan as a “cup-of-tea-by-the-fireplace” book; a 600-page book to be read with intention and attention.

And then (you can blame my modern-day distracted brain) I began to find it too dense.  The weight of the ink on the page grew heavy.  When we were in the modern days with PhD candidate Aaron Levy and the challenging Helen Watts, Professor of Jewish History, with whom he was working,  time passed quickly, as our two scholars read pages from the trove they found, called a Genizah.  As we  learned more of the 17th century backstory of the female scribe Ester and Mary, for whom she was a companion, and the rabbi for whom she scribed, Rabbi HaCoen Mendes, the stories at times became rather dense with Jewish history and knowledge. I slowed a bit and my interest waned. I found myself using my iPad often to look up words such as Spinoza, Sabbatean, jib and virginal (the noun).

But I took a deep breath, woke up from the intermittent naps I took while reading The Weight of Ink, and kept going.  The last 150 or so pages re-engaged me.  So, like many long books, I experienced a dip in the middle.  However, on total, I am giving this book four hearts.  I think it is definitely worth the read.  This is a book club book, and I am quite looking forward to our discussion in late January, as there is much to explore.

You may be considerably more knowledgeable than I am about Jewish history and the plague in London in the 17th century, but I learned a great deal from this novel.  It is, dare I say it, a feminist novel, as it is very much about the intellectual development of a woman in a time when women didn’t have many options.

So, with only minor hesitation, I recommend The Weight of Ink when you are ready to immerse yourself in a long read.  By the way, while long, it is not complex with characters.  Kadish manages to not inundate her tale with a multitude of characters.  There are, let me count, about a dozen significant characters, so you have ample opportunity to get inside their heads and hearts.

2 responses on “The Weight of Ink”