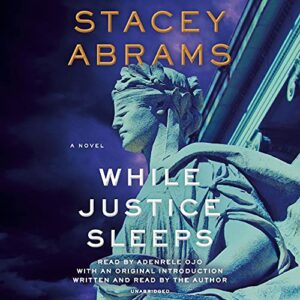 Avery Keene is a law clerk for the legendary Supreme Court Justice Howard Wynn, who, in a series of moves that surprised and floored most everyone in the know in Washington DC, he put himself into a coma and left directions appointing Avery as his guardian.  And then this 26-year old brilliant woman begins to unravel the series of chess-relevant clues that Wynn left her, about why he was in a coma; about an international bio-genetics conspiracy; and about an engineered genetics-based drug intended to kill Muslims and which actually killed prisoners in tests, implicating Homeland Security and the U.S. President. This is a legal and political thriller, and thrilling it was!

A fast, compelling read, Ms. Keene and her small entourage of co-discoverers are well-developed characters.  Abrams is a surprisingly potent novelist. Yes, this is the Stacey Abrams who is a political powerhouse in Georgia.  This is not her first novel!

The series of clues were often convoluted and difficult to decipher.  And confusing.  But our main character makes sense if it all, understanding symbolism and metaphor, searching for facts and truth, and being exceptionally strong in character and compassion.

A great read (with an appropriate double-meaning title) on a beautiful autumn weekend. I recommend While Justice Sleeps.