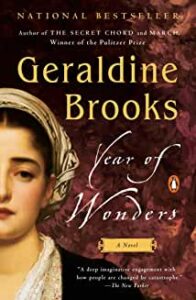 360 souls live in this isolated village in England in 1665.  By the time of “Leaf-Fall” 1966, two thirds have died from the Plague.  This novel is based upon Eyam, a town in England where the Plague did hit and consumed many residents.  Brooks builds a novel from a woman who is mentioned only briefly in the actual historical accounts, a maid to the Rector.  Anna, our main character, is that maid.

An odd time to read a book about the Plague?  Actually, it made me realize how fortunate we are. The Plague erupts in boils that burst.  People generally live only about 24 hours once they contract the disease, and very few survive.

I thought this book was beautifully written.  I love Brooks’ command of the English language, and her ability to contextualize it to 17th century England.  Anna is extraordinarily well-developed as a character.  I couldn’t help but love her.  And other main characters are also rich and full.

Anna works not only as a maid to the Rector Michael and his wife Elinor, but soon is caring for the sick throughout her village and, once the local midwife is taken by the Plague, learns to midwife as well.  Yes, there are times the Plague is graphically portrayed.  Appropriately, I think.  An interesting title for the year of the Plague, no?  Year of Wonders.  It tells you something about the author's orientation toward the Plague and how she tells the story.

Some reviewers did not like the ending.  I won’t create a spoiler here, but I seldom question an author’s ending.  They end it to tell the story as they see fit.  I thought the ending made perfect sense.

This is a book that engages and will draw you in, because her writing is so rich.  I recommend it fully.

Thank you, Mary, for sharing this read with me/us.

4 responses on “Year of Wonders”