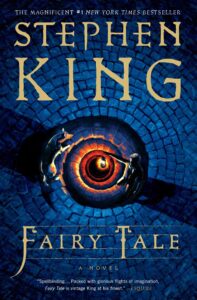 Once upon a time there was a 17-year-old boy named Charlie. Charles Reade, actually.  His mother dies in a terrible accident when he is seven, and his father turns to drink, but Charlie grows up to be a good, strong, clever young man. He promises God to do good as recompense in exchange for his father's sobriety. Which, yes, happens. Charlie then saves his neighbor from a fall off of a ladder, grumpy old Mr. Bowditch, who has an equally elderly dog named Radar, and a crumbling old house. The first half of this long book is a delightful story about Charlie, his father, Mr. Bowditch, and Radar.

And then Mr. Bowditch dies and all is revealed about how he can afford his considerable medical expense.  Out in his back shed is the entrance, long and steep, to another world, where gold pellets flow freely. Upon his death, Mr. Bowditch explains about this world and tells Charlie how to get there.  He is especially interested in convincing Charlie to go, because there is a sundial there that, when spun backwards, can revert someone who stands on it, to an earlier stage in their life.  Both Mr. Bowditch and Charlie want the German Shepherd Radar to take a spin on the sundial, as he too is dying.

Still fun, yes!  Soon we enter this other word, Empis, where its citizens suffer from a disease called “the gray” that slowly and brutally turns their faces into misshapen mounds of gray skin.  Charlie has many adventures and meets some very interesting characters who have lost much of their faces and often a sense – sight, hearing, eating, etc.

The Guardian and others call this book “terrifying.”  I am not certain I would have read it, if I had read these reviews first.

After Charlie and Radar travel deep into this land where evil creatures have overtaken the society and created the gray, depression, foreboding, and poverty, Charlie is thrown into prison.  Here is where the 200 pages of terror begin. The story here is brutal and murderous.  Even though I found this section of the book repulsive, still, I kept it at four hearts.  The tale is amazing, and woven throughout are stories, references, and metaphors that hearken back to numerous fairy tales.  Again fun!

With a grain of salt,  and a bit of self-surprise, I recommend this Stephen King.