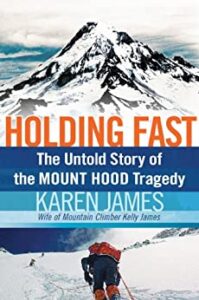 Holding Fast is the gripping story of Kelly James, who dies after reaching the summit of Mt. Hood, a few days before Christmas 2006, as told by his wife Karen.  They were married just over six years.  Sitting on an airplane when I reached the pinnacle ... when rescuers found Kelly’s body ... I cried.  I cried again when she describes Christmas Eve alone.  She told her kids she was with friends.  She told her friends she was with her kids.  It was a time to truly begin the journey of grief.  My heart broke for her.

The tale of his death, of which we know little but supposition, is really the tale of the living; of what it’s like to experience eight days awaiting the fate of your husband and father who has lost contact in the icy storms of the Cascades.  Karen writes well (she has been a journalist with ABC, CBS, and NBC).  Her story is intimate, emotional, strong.

I knocked Holding Fast down to three hearts for two reasons.  First, the James family is very religious, and I lost a bit of patience with all the prayers and supplications.  More important, I thought Karen James was simply unconscionable and selfish by reporting, for the entire book, about her pain, with very few and rare words about the wives of the other two climbers who were lost with Kelly, Brian Hall and Nikko Cooke.  She writes a bit about this part of the tragedy on page 147.  It is as though these two men were not much more than precious climbing equipment that was also lost on the mountain.

Karen James writes a great deal about her grief, which may or may not speak to you.  And, as with any outdoor adventure and tragedy, the story touched my heart, and I believe it will touch yours.

One response on “Holding Fast”