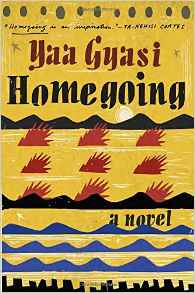 I started Homegoing on CD, while driving to Cannon Beach Oregon for a watercolor workshop at the ocean.  And I became a bit confused.  That evening, however, when I opened a print copy of the book and found an organization chart (no, that's not what it called.  Cripes, I have been working in the corporate world for way too long!)  Anyway, once I found the family tree, and backed up a little on what I had listened to, Homegoing began to fall into place and I found my rhythm with the book.

The author writes about a character in each of 9(?) generations, beginning on the Gold Coast of Africa in 1764 and through the 1990’s in Palo Alto.  The way she tells the story, you don't have the opportunity to follow one character.  It is on a timeline, not all at one point in time.  That is a bit frustrating.  Still, the depth of the story illustrates Gyasi’s ability to immerse her readers in Black family culture and the slave trade through the generations.  Her storytelling raises this novel to a full four hearts for me.  The only "character" who remains consistent through the generations is a black stone pendant that is handed down from generation to generation.  It is the stone that ties the story into one piece.

This novel is the Deschutes County community read for 2017, and I can see what inspired this choice. You receive an education as well as entertainment. I will be hearing the author speak on May 7, and will edit this post if I learn anything insightful to add!