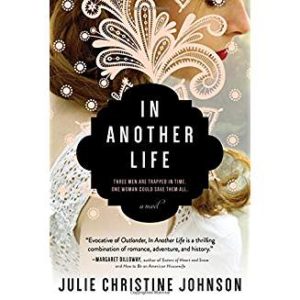 As In Another Life opens, our main character, Lia, has just arrived in Languedoc in southern France. It is 18 months since her husband Gabriel died.  As I read page one, it is 17 months since Beryl died.  I am astounded by the similarity of Lia's emotions and my own, and am immediately drawn into her character.  She has come to this land to stay in a friend's stone cottage.  She has come to consider the next steps in her life.  It hasn't even occurred to me to consider my next steps. It never even crossed my mind.  Well, I guess it has now!

But this blog post is not about me ... it is about this book.  On the front cover, a reviewer claims it is “evocative of Outlander.”  As a guzzler* of the Outlander series, this caught my attention.  The structure differs from Outlander.  Let me tell you a bit about the plot, to better explain the “time travel” aspect of In Another Life.

Lia returns to Languedoc in part to continue work on her abandoned dissertation, which is about the Cathars, and in part to discover her life's "next steps."  In the thirteenth century, the Catholic Church incited a Crusade against the Cathars, a heretical religion according to the Catholic scholars of the time.  While in Languedoc, Lia’s inner historian is enlivened again and she learns a great deal about the powerful players from the year 1208 who facilitated or resisted the Crusade.  I think it is sufficient to say, without giving away too much of the story itself, that the Cathars believed in reincarnation.  So “time travel”  in this novel occurs as rich characters who were incarnated in 1208 interact with our modern day characters.

I thoroughly enjoyed this book!  I like the exploration, the mystery, the time travel, the depth of the characters, and the romance.  This is a book club book and I know at least one member of book club did not like this book.  Our conversation will be interesting!

*(Ha ha, I just learned the word tachyphagia - it means to eat rapidly or fast.  I thought “guzzle” was little more user-friendly!)

4 responses on “In Another Life”