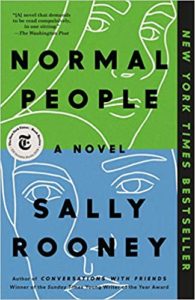 This is the story of Marianne and Connell.  We witness four years of their lives in Ireland, from school through university.  They move in and out of each other’s lives, always good friends, sometimes lovers, sometimes not seeing each other for months.  But yet, they understand each other.  Deeply.  In school, Connell was popular and well liked and everyone ignored Marianne.  In University, the tables turned and Marianne came into her own, while Connell struggled with shyness and uncertainty.  Both, by the way, are brilliant, which perhaps explains much of their attraction to one another.

I sometimes complain about lack of character development, and so I must give credit where credit is due.  Sally Rooney has created two immensely rich and well-developed characters, both with flaws, both with gifts.  The story is frustrating, as they cannot land on what relationship they want with each other.  Sort of like a new jazz improv band that hasn’t figured things out yet.  When they come together and play in unison, the music is good.  Not yet great, but good.  But when they spin off and do their own thing, nothing really clicks, everything is imperfect and out of sync.

My memory of my discovery of this book is indelible. It was March 15 and my friend Carol and I were in Dudley’s bookstore downtown for a cup of tea.  We were sitting far apart and didn’t hug and yes, the next day Oregon went into lockdown.  On this, my last excursion into the world for a long time, Normal People was propped open on a shelf with a recommendation from a Dudley’s staff member.

I didn’t know how I was going to rate this book until the last page.  I give it three hearts.  It comes with my recommendation, with a bit of hesitation.  It is well-written and an interesting read, but is ultimately unsatisfying in some way.  Oftentimes relationships do not fall into easy, explicable molds.  This is true for Marianne and Connell.  Normal People will make you think.