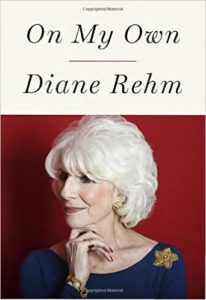 A number of people recommended this book to me, and I can see why!  Diane Rehm, host of the Diane Rehm Show on NPR since 1979, writes about the death of her husband John, and what it is like being “on her own.”   I found her writing style to be easy, honest, and compelling.  Perhaps part of why I appreciate this book is because her situation parallels mine in many ways.  No, it is not her situation that parallels mine, it is her perspective.  She is a dynamic, engaged, intelligent woman struggling to reconstruct her life.  She and John were married 54 years!  Wow!

Many of her stories resonated with me, such as … putting on a dress (okay, I NEVER actually put on a dress) and then simply not going out to an engagement, because she had no energy to smile at people or talk with strangers.  Yesterday and today both I cancelled engagements for the same reason.

Of course, she also helps me to see things differently!  For instance, she writes about moving to the center of the bed.  Really?  Never even occurred to me!

Ms. Rehm’s most compelling message is about how her husband chose to starve himself to death because he lived in a state where death with dignity was not possible.  At nearly 80 years old, Diane Rehm is working with Compassion and Choices (compassionandchoices.org) to broaden the availability of physician-assisted death.  It is inspiring to read about her passion and commitment!

This 161 page book is not exactly an easy read, but it is a quick one.  Her style is conversational.  I guess you might expect no less from a woman who hosted an enormously successful radio show for 35 years!