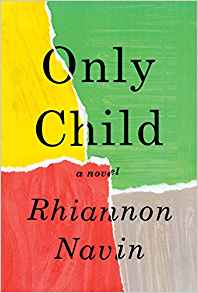 Writing Only Child took considerable courage, I believe.  This is Navin’s first novel (she has two previous nonfiction books) and it is written from the perspective of Zach, a six-year-old first grader who survives a school shooting.  Nineteen of Zach's fellow schoolmates and teachers die in the shooting, however, including one very close to Zach, so be is hardly unharmed.

We learn about Zach's feelings, his assumptions, what (and how) he discovers about the shooting, the support he receives and doesn't receive from the adults in his life. Most compelling  is how he works with his feelings.  A self-proclaimed “very good artist,” Zach becomes overwhelmed with the complexity of feelings he has, and how unrelated feelings pile upon one another.  He colors pieces of paper different hues to represent different emotions and, in this way, he is able to separate, manage and integrate his emotions.  Well done!

The entire novel is written in Zach's six-year-old voice.  While that is interesting and draws the reader in, it also left me wanting.  I wish the novel had interspersed Zach chapters with chapters by his father, who doesn't have a clue what Zach is experiencing; or his mother, who is more emotionally connected to Zach, but loses him in her obsessive search for justice; or Charlie, the father of the shooter.  I would like to know what was in their emotional library and how and why they made some of the decisions they made.  And I would have liked a break from the logic, words, and perspectives of a six-year-old.

Voice fatigue aside, what I find at best disappointing and at worst unconscionable and irresponsible is that Navin apparently does no research for this novel.  She doesn't talk with a single child survivor.  She doesn't interview a crisis counselor.  She doesn't speak with school administrators.  She readily and proudly admits in interviews and on her website that her “focus group” comprises her own three young children.

The story is an interesting and quick read.  I was going to take it on a plane with me this Sunday, but I finished it already!  The lack of research, however, makes me hesitant to believe I have read something that is based in truth, real information, or accurate perception and insight.

2 responses on “Only Child”