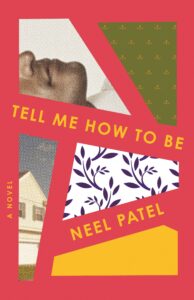 Tell Me How to Be follows two characters—Renu and her son Akash. They come together, along with their son/brother Bijal, to pack up and sell the family home on the one-year anniversary of Renu’s husband’s death.  We go inside Renu’s mind and then Akash’s and then Renu’s again. Back and forth.  We know there is a possibility of reconciliation among the family members, but really the story is more about Renu’s internal journey and Akash’s journey of life thus far.

Part One, the first 100 pages or so, is the most challenging, I believe.  Akash’s alcoholism is like a raw, rough, searing, burn every time we get to an Akash section.  He is so self-destructive.  Renu is easier, though her disappointment with being an Indian woman raising a family in American is palpable.  In their individual sections, each is talking to someone else, and who that someone is, is not revealed for quite a while.  Suffice it to say that, as they muse, they address former, long-lost loves. Renu’s secret is that she has been in love with a man from before, for their duration of her marriage.  Akash’s secret is also that he has been in love with a man since his teenage years ... and he is in the closet..  He has admitted to no one in his family that he is gay.

I found the characters interesting (especially Renu) and the relationships sadly intriguing.  I think this comment from a reviewer is quite enlightening:  “Tell Me is a perfectly average novel about the Indian experience in the US, of racism, bullying, homo­phobia.”   Yes, Patel seems to be a rather average writer; there is not much to complain about and not much to laud.  If you like books about complex relationships and their resolution, this book is worth your time.