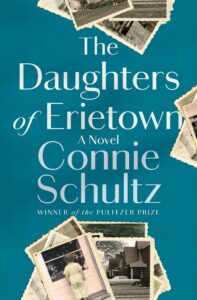 The Daughters of Erietown is a tale of resilient women in Erietown, Ohio, on Lake Erie.  Spanning 1957 to 1994, we see the generations unfold alongside growing feminism and radically changing roles for women in the world.  Ellie, our main character, has dreams of nursing school and of marrying Brick McGinty.  Her second dream comes true, but not quite the way she expected, when she and Brick became pregnant in her senior year of high school.  Her daughter Sam is born ... another major character, who we witness growing into womanhood.

Brick, of course, is a significant player in the book.  In more ways than one. He is not quite all that Ellie had dreamed of.

Schultz’s character development is very strong.  After a while, we really come to know Ellie and Sam, and can anticipate their reactions to circumstances and situations.  The story is also strong and pulls us along.  We are compelled to witness what choices Ellie and Sam make, as well as those of Brick and Sam’s brother Reilly.

So, why only three hearts?  Remember that three hearts represent, “I recommend with some reservations.”  I would call The Daughters of Erietown a romantic novel.  Not intending to be sexist here, I suspect it will appeal more to women readers than men, as the only significant male character is flawed.  And frankly, he is not very interesting. This novel is an appealing dive into the lives of a mid-20th century family in middle America.  I recommend it, but with caution.