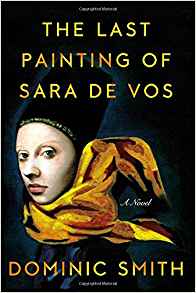 I really like the story line of The Last Painting of Sara de Vos.  Sara de Vos is a not-very-prolific painter in Amsterdam in 1631, and the first woman master painter in the Guild of St. Luke. Centuries later, 1957, Ellie Shipley is a struggling art student in New York City, when she paints a Sara de Vos forgery.  Of course, her single moral failure haunts her all her life, and comes to roost in Sidney in the year 2000.  Here is her nadir, against the allegory of an old painting:   “For two days she has had the sensation of seeing her own life under an X-ray – the hairline fractures and warped layers that distort the topmost image. She sees her private history, the personal epochs and eras in foreign cities, with a clean, clinical detachment.  They have all led to the cracks on the surface and it is time to take responsibility for those flaws.  Last night, she drafted two letters of resignation, one to the museum and one to the university.”  (Page unknown ... it is page 371 in the large-print edition)

It took me a while to become engaged in this book, in part because of the jumps in time. Although each chapter is clearly marked, I still had a bit of trouble wrapping my head around who, where and when. As the novel begins, there are four settings: two in New York in 1957; Sydney in 2000; and Amsterdam, 1635.

The other challenge is becoming accustomed to Mr. Smith's writing. I find it rather flowery and hard to grasp.  Some of you might quite enjoy his writing!   Here is an example of what kept me at a distance from the novel for the first half (page 155, large print edition):  “Tulp is a man on the ascent; as a city anatomist he is said to have personally signed the fitness reports of the first settlers in New Netherland.  With mayoral aspirations, he regularly publishes essays in the newspaper about apothecary reform and the plague and the circulatory powers of human blood.”

Eventually, however the story takes over and the language moves into the shadows.  All in all, if the topic sounds interesting, yes, read this clever tale.

3 responses on “The Last Painting of Sara de Vos”