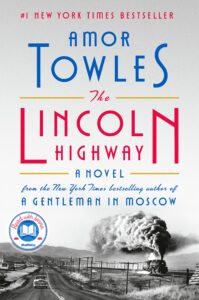 Emmet Watson, 18 years old and just released from a juvenile work farm in Salina, Kansas, returns to his Nebraska home, driven by the warden.  There, he is reunited with his delightful and precocious brother, 8-year-old Billy, and faces the foreclosure of his family farm, as his unsuccessful father has just died from cancer.  Going through their father’s belongings, Billy discovers a packet of postcards sent from their mother to the boys as she traveled west … this is news to both the boys!  Billy and Emmet decide to travel the Lincoln Highway to San Fransisco to find their mother, who abandoned them years ago.

Except, once the warden drives away, much to everyone’s surprise, they learn that Wooly (a medicine-addicted young Northeastern boy from money) and Duchess (the son of a vaudevillian, with his own significant cadre of questionable judgements and reckonings), two of Emmett’s compatriots at the work farm, stowed away in the trunk of the warden’s car and were now ready to travel wherever Emmett’s adventures were to take them.

But California is not in the picture.  Indeed, not only do Emmett and Billy never make it there, they don’t even advance one westward mile. In fact, they travel about as far away from California as is possible in the continental United States, to New York City.  But only after Emmett’s Studebaker is stolen, and relatives need to be found and visited, Billy meets Ulysses and Abacus Abernathe, and Duchess’ orphanage needs strawberry preserves, to name just a few of the side trips.  “Detours beget detours” (NYT review).

Amazingly, we witness ten days and 600 pages of adventure, youth, and remarkable characters.  The tone is mostly light, though some darkness shows up at the end.

The only aspect of this book I did not like is that the characters never ever manage to travel west on the Lincoln Highway!

Yes, I surely recommend this novel by a fine author.

One response on “The Lincoln Highway”