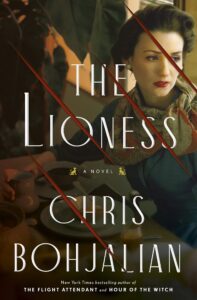 Katie Barstow, a well-known actor when this novel is set, 1964, takes an entourage on a safari in Africa, to the Serengeti.  The entourage includes her new husband David (this trip is part of their honeymoon!), her husband’s best friend and his wife (Billy and Margie), Katie’s best friend Carmen and her husband Felix, another actor (Terrance), her publicist (Reggie) and her agent (Peter).  It appears to be the trip of a lifetime!  And, for some, it is the last trip of their lifetime.

The novel is intriguing.   The story line is clever and engaging.  And violent.  We know that the African Safari “turns deadly,” but, dear reader, don’t expect there to be one accident or murder or goring and then the tale plays on.  We actually follow the entire entourage over a few days while they are in capture by a group of perhaps-Russian men, for reasons unknown.  There is considerable violence and death.

The format consists of 31 short chapters, each from the perspective of one character from the entourage, or their safari guides.  Each chapter moves the story forward AND tells us something about the character’s background and/or their relationship with other characters.  So, bit by bit, the characters build and we acquire a strong sense of who they are … their strengths, dreams, histories, and foibles.

Somehow, Bohjalian writes these chapter flawlessly.  Through the use of a centered dividing ellipse, he moves us from the present to the past and back again.  I was, never once, confused about where we were in the timeline.  I think that took real authorial skill on Bohjalian’s part.

So, my recommendation.   Hmmm.  It is good story, a powerful story, an engaging story.  And you learn a great deal about the savanna and the current (1964) attitudes towards race, both in Africa and in the US.  I am very violence-averse, and yet this novel did not send me running.  The author built tension that held me until the very last page. If it appeals, yes, pick it up.  I don’t think you will be disappointed.

One response on “The Lioness”