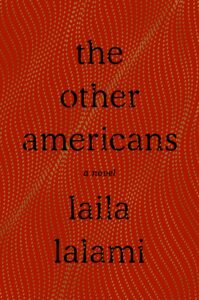 The Other Americans begins when a Moroccan immigrant named Driss Guerraoui is killed by a hit and run driver one evening while leaving his diner, near California’s Mojave Desert and Joshua Tree National Park.  Driss’s American born daughter Nora opens the book by telling the story of the death of her father, as she enters as the main character.

After Nora’s initial recounting of the news, Lalami introduces her other narrators.  There are nine in all, including Jeremy, an old school friend of Nora’s, who is white; Efrain, an undocumented Mexican immigrant who witnessed the hit and run; Maryam, Driss’s Moroccan wife; Salma, Nora’s overachieving sister; and Coleman, the black woman detective working Driss’s case.

This is a mystery, a love story, a family saga, and a commentary on American culture.  The Other Americans is our community read this month, presented by the county library.  This is the 18th year our county has enjoyed a community read, called “A Novel Idea.”  The book was chosen by both my book clubs to read this month, and so my expectations were high.  And dashed.

Moroccan-born Laila Lalami introduces so many cultural components, including xenophobia, undocumented immigration, race, opioid abuse, PTSD from the war in Iraq, family expectations, and more, that she does not cover any of them with particular depth, clarity, or expertise.  I felt she did an especially poor job of writing about race and culture.  She mentions these elements only casually, and without an exploration of either her character’s internal experience, or much depth in the relationships among the characters.

That being said, her development of Nora’s character is very strong, and the mystery storyline (who DID kill Driss, and was it an accident or murder?) make the tale readable and engaging.  But it was neither the social commentary nor the learning I was hoping for.