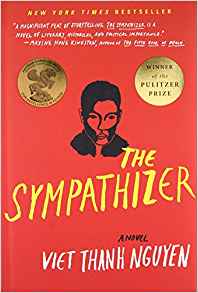 I struggled to finish this book, and perused the last 150 pages.  Though the author has some wonderful wry humor, I did not care for his story-telling and his character development.  Every time I opened this  book, I literally saw the main character, an unnamed half-French half-Vietnamese protagonist, as a piece of tissue paper.  He was so thin and flimsy, you could see right though him and he had no there, there.  I found him shallow, especially given the nature of the story he was trying to tell, and not a bit likeable.  My eye surgeon, Dr. Alul, saw me reading this book in her office on Monday and she said “Do you like it?  It is pretty depressing.  I had a really hard time getting through it.”  I found that interesting.  I had not thought of it as depressing, but I guess it really is.  And I am not enjoying “depressing” right now.  After that conversation, I hit the last 100 pages and, though there is some redemption, the further you read, the more profoundly depressing the tale.

This is a fictionalized story of the fall of Saigon during the Vietnam war, and the refugees who make it to America. We follow our main character, who is a Captain in the military and a spy, as he attempts to acclimate to America, or, perhaps more precisely, to not acclimate to America.  We read of the struggles of the refugees, the culture clashes, the challenges, and a bit of their successes.

Two million Vietnamese left their country after the fall of Saigon.  120,000 of them came to the United States.  Of the 120,000 who came here, 1500, (1.25%) chose to “reconcile, return, rebuild” and returned to Vietnam.  Of those, most were held in “reeducation camps” where they experienced prison conditions, forced ideological change, brutality, violence, humiliation and, for many, death.

I cannot recommend this despondent book, however, if you read it, I will be very pleased to read some other views!

2 responses on “The Sympathizer”