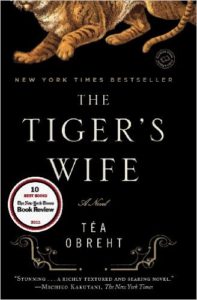 She deserves four hearts; I am certain of it.  Ms. Obreht's novel, however, is intricate and complex, and I must read it a second time before giving her her due. (Be forewarned, Casting Crew Book Club; I will be suggesting The Tiger’s Wife as a 2017 read!)

The Tiger’s Wife is a beautiful, mesmerizing tale.  She tells of a doctor and the death of her beloved grandfather, set in an unnamed Balkan state mending from war.  But it is more than this.  It is a compelling mix of reality and myth, of history and fairy tale.  She also tells of the encounters with the “deathless man.”  Michiro Kakutani of the New York Times writes, “…she demonstrates an uncommon ability to move seamlessly between the gritty realm of the real and the more primary-colored world of the fable.”

As delightful as the story itself, it is also important to note that this is Téa Obreht’s debut novel. And she is “twenty something.”  I was unable to keep track of the artful wording and phrasing she creates on every single page.  So, instead of writing down pages to share, I decided just to open to a random page while writing my review, guaranteeing myself I would find a superb example.  Let’s try.  Okay, page 91. “His thirst insane, the tiger lapped up pools from the leaky fountain where the flower women filled their buckets and then put his nose into the face of a sleeping child who had been left, wrapped in blankets, under the pancake stand.”  How can anyone write with such beauty, clarity and eloquence?

2 responses on “The Tiger’s Wife”