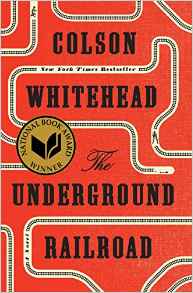 Wow.  I mentioned after my last blog (Bullseye by James Patterson), that I was going to choose a more meaningful book, and I certainly fulfilled that intent!  This is a haunting, devastating, and decidedly meaningful novel.

The Underground Railroad begins on a vicious Georgia plantation, where escape is on the minds of all.  The early pages are very difficult to read; not that it gets easier later. I was shocked and stunned to learn about the brutality among slaves, not only just perpetrated by slave-owners upon slaves.

The author tells us Cora’s story, who flees the plantation where she was born, risking everything in pursuit of freedom, much the way her mother, Mabel, did years before.  Colson Whitehead consistently conveys the fear, humiliation, and loss of dignity of a slave attempting to be free. Cora finds herself swept into the great secret undertaking that is the underground railroad.  And here is where the novel astonishes.  Whitehead has taken the historical metaphor of an “underground railroad” and made it real, complete with stations (some magnificent, some just dirt), stations agents who risk their lives to inform runaway slaves about the hidden entrances, and trains with no regular schedules. It is a magical metaphor.

This beautifully written book was on President Obama’s reading list for 2016. Amazing.  Will our next president suggest such a read to us?

The ending(s) – plural because there are a few – are poignant and powerful.

This book should be required reading for us all.  Do not expect to be thrilled by it.  Expect to be evocatively and deeply moved.

2 responses on “The Underground Railroad”