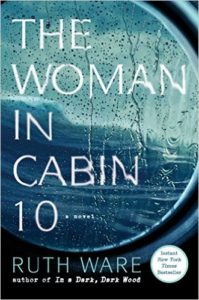 Lo Blacklock has landed the assignment of a lifetime.  A travel journalist, she will be reporting on the maiden voyage of the private exclusive sailing of the Aurora.  Yes, the Aurora, which has only ten cabins for guests, sails to Norway from London for a luxury viewing of the Aurora Borealis.  But Lo’s visit to the Northern Lights begins quite unpleasantly, as she witnesses the woman in cabin 10 being thrown overboard.  But all guest and staff are accounted for and there is no one staying in cabin 10.  What did Lo actually witness?

The mystery is fun as it unravels and sweeps the reader in.  Lo, however, takes some getting used to.  She drinks too much.  Constantly.  It takes a bit to warm up to Ms. Ware’s main character.  Eventually, though, I became intrigued with the mystery and suspense and, of course, the surprising resolution.  Also, I personally would hesitate to hire the two editors mentioned in the Acknowledgments.  The Misses Alison and Alison seem as enamored as Ruth Ware of Lo “gritting her teeth,” which she does, I swear, 10 or 12 times.  Perhaps another expression could be used occasionally to portray her angst?

In summary, for a light and easy read over the holidays or on the beach, I recommend this tale!