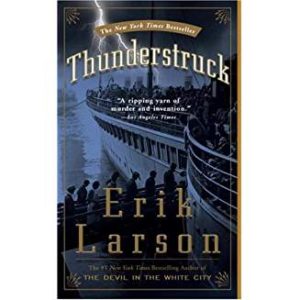 Thunderstruck, the interwoven stories of Guglielmo Marconi, credited with the invention of the wireless, and Hawley Crippen, a physician, perhaps eventual murderer, isn't Dead Wake or Devil in the White City.  I was disappointed that the narrative lacked a strong sense of mystery and urgency. Thunderstruck read more like history than narrative non-fiction, to me.  At times it was dry and repetitive.  I began to skim the sections where Marconi is testing his wireless, after about the 15th or so iteration of such tests.  One reviewer said Larsen “was exhaustive without being excessive.”  I beg to differ.  I thought Larsen included too much detail about Marconi, his company, his competition, and his endless wireless tests.

That being said, I never once considered putting it down.  Larson's storytelling is good.  He excels at creating a whole picture of his characters ... not just what they accomplished, but their personalities, their foibles, their strengths, their loves, their obsessions.  I think he just included a bit too much in this tale.

The last 20% of Thunderstruck, the chase for the fugitives, was the page-turner part!  I do think Larson's editor should have insisted on a clearer distinction as the chapters shift in time.  The Crippen story occurs mostly ten years ahead of the Marconi story until they at last intersect.

So, do I recommend Thunderstruck?  Yes, with some reservation.  Read Thunderstruck if you particularly like Larson, or you are intrigued by the development of modern-day communication devices, or you particularly like the social and technological leaps and bounds society encounters at the turn of the prior century. Otherwise, I don't suggest this book leapfrog to the top of your list.

One response on “Thunderstruck”