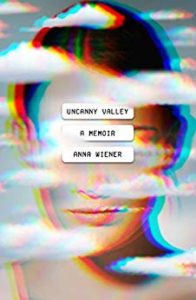 What a phenomenon!  This book was published on January 14 and immediately the author was interviewed on NPR; Uncanny Valley was named book of the week by The Week; the SF Chronicle did an article on her; the book was reviewed by the NY Times, the New Yorker, and Atlantic Monthly.  And today is only Jan 22!

Uncanny Valley is written by the niece of a colleague, so right from the start, I was a little nervous.  I knew I would be completely honest in my blog posting, and I could only hope I wouldn’t find myself dissing this book or being brutal.

In the first chapter (or is it the second?  I must admit to some level of irritation with books that have no chapter numbers or names), Ms. Wiener was incredibly naive, and I became scared.  She never heard of eating snacks at work, of “ask forgiveness, not permission,” or of designing your own job.  “Oh no,” I thought, “some millennial writing about corporate America who has spent all of five days in it.”  Ahh, but that rapidly dissipated.  She proceeds to communicate a smart, bright, funny, refreshing, and illuminating view of Silicon Valley and her first jobs in very small startups filled with young men in hoodies and company-logo t-shirts, traveling around the office on One Wheels.

One reviewer remarked positively about her short sentences.  I, on the other hand, found myself actively watching for her long, complex, verbally staccato sentences, like this one,  “In the other direction was Valencia Street, a living diorama of late-stage gentrification:  third-wave-coffee shops selling paleo lattes, juice bars hawking turmeric shits, waifish Australians clutching branded paper bags from spartan boutiques.” (P 90). I adored these sentences!

In the second half, the section called “Scale” I thought her writing lost speed.  It was like hiking partway up a mountain and losing momentum.  The wondrous enjoyable hike becomes a bit of a slog.  What she writes about when she joins a new high tech company in “Scale” is more serious (the company was trying to recover from a gender discrimination lawsuit), but it also feels like the author became jaded and less enamored by the crazy creativity and weirdness she is writing about. She writes more seriously about misogyny, racism, and meritocracy.  It feels as though she is looking to solve a problem ... is Silicon Valley a problem?  ... but with no real definition of the problem or vision or parameters for a solution.