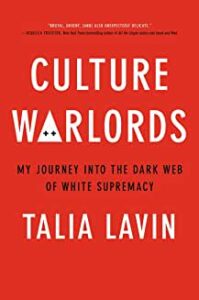 This is the most profound, most devastating book I have read.  The author, a Jewish female journalist,  uses various guises, disguises, names, personalities, and personas, to enter the “dark web of white supremacy.”

I cannot begin to truly understand all I read.  First, I thought anti-Semitism was only a part of the white supremacist agenda.  It is not.  It is at the center, the core. The first few chapters explain much more, but in a few words, “What underpins this fixation — the intellectual foundation of the white-supremacist movement — is a stalwart belief in the omnipresence of the cunning, world-controlling, whiteness-diluting Jew ... the Jew is most dangerous because of his adjacency to whiteness, and a desire to destroy it, with crafty malice, from within.”  (pg 24/25).

You will read about race violence and race war, and about a dating site designed only for white supremacist men and women.  You will learn about an eleven-year-old imbued with racial hatred; about the role and agenda for intentional violence in our country; and about mind-numbing conspiracy theories.

The chapter on incels completely alarmed me.  “Incels” are men who are “involuntarily celibate.”  The misogyny, hatred, self- and other-loathing is shocking.  Incels on Incels.co and braincel actively encourage a suicidal poster (pg 115) to complete his agenda.  The author, who was not allowed to post as a woman, created a young 21-year-old angry white male, Tommy O’Hara, in order to dialogue with incels.  This chapter especially, and the entire book, are not for the faint of heart.

Lavin’s writing is inconsistent.  Some chapters are engaging and move the reader deeper into the material.  Other chapters seem to rely on context to such a great extent, that the point of the chapter, and subsequent learning, is lost.  The difference is when she writes of events where she is an intimate and involved player, and when she writes about topics from an intellectual distance.  The former is quite engaging.  The latter is important, though more difficult to absorb.

I must recommend this disturbing book.  It is important, distressing, terrifying.  Truthfully, I believe we all need to know of that which Lavin writes.