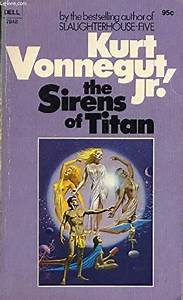 Many argue that The Sirens of Titan is Vonnegut's greatest work.  It is dark and funny; classic and counter-culture; warm and cold; satirical; melancholic; bizarrely imagined; philosophical.   I loved it!  But that must be taken with a grain of salt.  I am a huge Vonnegut fan.  I first read this book in 1971, when I took an English course on Kurt Vonnegut at the University of Michigan.  Yes, that was 50 years ago!

The plot?  Hmmm.  The main character is Malachi Constant, the richest man in America, who has his memory wiped when he is recruited into the Army of Mars that is planning an invasion of Earth. Tying the story together is Winston Niles Rumfoord, who, in his private spaceship with his dog, Kazak, accidentally flies into an uncharted chronosynclastic infundibulum, which scatters his particles through space and time, giving him the ability to see the future, and to appear at set intervals on various planets.  We follow Constant’s life through meaningless wealth in America, his time on Mars and Mercury, and finally on Titan, Saturn’s largest moon.  We also meet a Tralfamadorian, invented here in The Sirens of Titan, and which reappears in Slaughterhouse Five.  Tralfamadore is the planet where all beings live in all times simultaneously.

Vonnegut makes me wonder what I am missing, what he infers, what the hidden meanings and suggestions are, what is truth, what is satire.  I never know the answers to these philosophical questions, but thank goodness his writing is so damn engaging!  How can you fault The Church of God the Utterly Indifferent?  Or a world with UWTB .... the Universal Will to Become, i.e., that which makes universes out of nothingness at both macro levels and mundane day-to-day levels.

Along with his 14 novels, three short-story collections, five plays, and five nonfiction books, Vonnegut was revered, studied, interviewed, loved, and always prolific.  He penned much about writing, including his brilliant “8 Basics of Creative Writing.”  My favorite is number 4: “Every sentence must do one of two things — reveal character or advance the action.”

This is our February read in my Casting Crew Book Club.  I am fascinated to hear what less biased Vonnegut fans have to say about The Sirens of Titan.  Yes, I absolutely recommend it, along with anything else by this writing genius.

2 responses on “The Sirens of Titan”