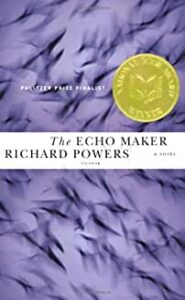 Mark Schulter, 27, has Capgras.  Capgras is a psychological condition in which an individual believes someone they love and is important to them has been replaced by an imposter.  Mark flips his truck on an icy road in February in Kearney, Nebraska and nearly dies, during the annual migration of the sand cranes landing on the Platte River and heading north for the spring and summer. Soon, his body is healing but this psychological condition remains.  His sister, Karin, leaves her job the night of the accident to come care for him, and, yes, Mark believes Karin is an imposter ... a government agent who has been schooled in the ways and history of Karin and Mark, for reasons unknown.

We watch the sorrowful and frustrating story unfold, as Karin does all she can for Mark, who never trusts her and is sad and worried that his only sister has not come to care for him.

And then there is a note left by his bedside in the ICU.  Who left the note?  What do they know about how Mark flipped his truck?  Did someone run him off the road?  The note reads:

I am No One

but Tonight on North Line Road

GOD led me to you

so You could Live

and bring back someone else

So, there is also a mystery in addition to the dense relationship between brother, sister, caregivers, and lifelong friends in Kearney.

Also, there is a third major character, a neurologist, researcher, and best-selling author, who teaches at NYU School of Medicine, Dr. Gerald Weber.  Weber, who Mark calls “Shrinky,” comes to study Mark, and perhaps to help. Many of us of a certain age just might relate to Weber's musings and discomfort.  “Did I do enough in my career?  Was my writing and publishing good?  Did my research really inform anything?  Did I exploit people in the process?  How much of my work was just about my ego? Did my work matter? Can I actually do anything to help Mark?  Am I done now?  How do I know?”

I am becoming a Richard Powers fan.  As with The Overstory, he writes smart.  You don’t breeze through his books.  There are times when I have to stop and reread sentences or paragraphs, especially, in The Echo Maker, when Weber is lecturing to his class or on the book-promotion circuit.  Richard Powers is a physicist, which informs his writing in cerebral and intriguing ways.  I must admit, I did research to fully understand the ending.   I will be curious to learn if you understand the ending on your own!

I feel like, in reading this novel, I am reading something important; something that matters.  Simultaneously I am drawn into Powell’s well-developed and differentiated characters.  Yes, I fully recommend The Echo Maker.  Yes, I am going to read another Richard Powers.