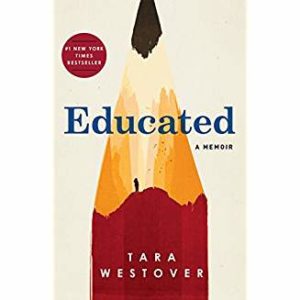 Hmmm, Educated is difficult to rate.  It hovers between three and two hearts, but I have settled on three.    This is the true story of Tara Westover, raised Mormon by her survivalist father and mother, never sent to school, forced to work dangerous jobs in her father’s scrap and junkyard business.  It is the story of her survival under a mean but loving patriarch.

I found her narrative at times riveting, especially once she leaves the family home and begins to pursue her education at BYU, and at times boring.  Her writing is inconsistent.  I think she is not a very good writer and includes too many details of her life.  Then again, with six siblings living in their family home in Idaho, the stories, the catastrophes, the violence, and the relationships are numerous and complex.

The abuse she endured was not like my recent reads, My Absolute Darling and The Great Alone.  There is no sexual abuse.  More, there is religious abuse.  Educated portrays very well the Mormon doctrine of the power of men, and the servitude of women.  I don’t think most of the Westover family ever sees the gross error of these doctrines.

So, do I recommend it?  Yes, I guess, but not wholeheartedly.  I think you will just have to try it on for size!