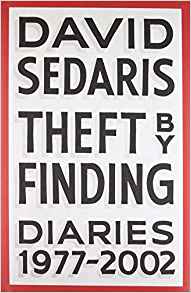 David Sedaris (Me Talk Pretty One Day and numerous others) decided to revisit his diaries, which he began in 1977.  Though the first few years were handwritten, when he printed off the digital diaries, he had 8 inches of paper to wade through!  Wow!  He decided to edit selected passages from his diaries into two books.  Theft by Finding is the first volume, 1977 through 2002.  The second volume (I cannot find the title) will cover 2003 – 2017.

I knew Sedaris had a rough start, but this book is depressing.  Drugs, poverty, and violence are much of the tale he tells.  I actually think he may have been better off if he didn’t self-edit his own diaries to create these books.  He seems obsessed with people who are differently abled ... in wheelchairs, sight-impaired, have acne scars, or who are mentally unstable.  He has an extraordinary number of stories about being approached for a cigarette or money by very angry people, and a whole trove of times he was assaulted on the streets of New York for appearing gay.

He has a proclivity for telling his life story with these depressing episodes.  About halfway though, he begins to mature, have success, and find love.  But the sum total of his relaying to us his experience of meeting Hugh is two short sentences, something like, “I met this cute guy, “ and “I think I am falling in love.”  I would have been much more engaged in this book if he were able to share more of his internal emotional experiences, and less of how he found abuse in the world.

Two-thirds of the way through (I kept reading because I AM interested in his long-term love with Hugh, and his success as a comedic and serious writer, and I wanted to read some of these entries), I realized this book was probably supposed to be funny sometimes.  Now, it is a character flaw on my part, I know.  I seldom find the written word funny.  You could read aloud to me from an amusing book and I would laugh.  But when I read the same words on paper, I don’t find them funny.  I laughed only once when reading Theft by Finding.

Theft by Finding depressed me, disappointed me, and was often confusing.  Actually, I suspect his second volume will be better, because his life will be less dire, but I don’t have the stomach for another Sedaris right now.  I even removed his newest book, Calypso, from my library list.  Sorry to say.

One response on “Theft by Finding”